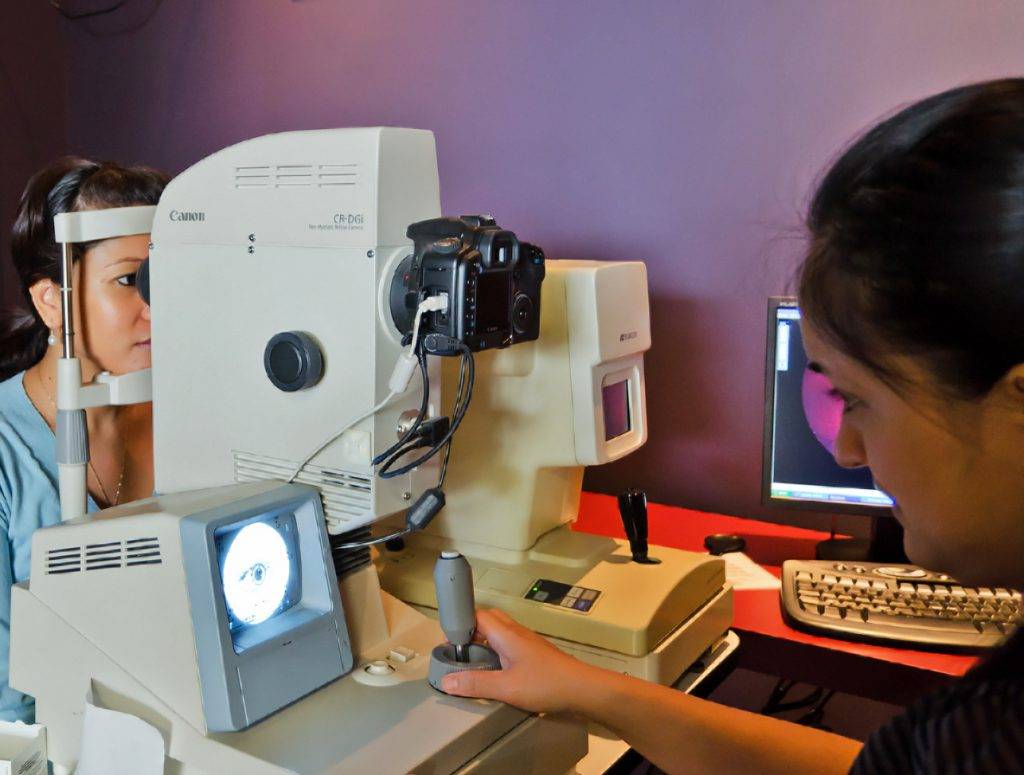 DFE is a diagnostic procedure that employs the use of mydriatic eye drops (such as tropic amide) to dilate or enlarge the pupil in order to obtain a better view of the funds of the eye. Once the pupil is dilated, examiners often use specialized equipment and lenses to view the inner surfaces of the eye. DFE has been found to be a more effective method for evaluation of internal ocular health than non-dilated examination. An instrument called a binocular indirect ophthalmoscope is worn on the doctor’s head. This frees the doctor’s hands to use a powerful lens to focus light emitted from the ophthalmoscope into the eye. With this instrument, the image is a bit smaller but the field of view is much larger, allowing the doctor to view the entire retina. A thorough retinal examination not only provides clues about your retinal health but also about your overall health and signals evidence of many systemic diseases before their symptoms show up elsewhere in your body.

A dilated funds examination will require the use of an eyedrops that takes approximately 20 to 30 minutes to take effect. it may take longer in older patients and diabetics. After the pupils are dilated, an internal evaluation of your eyes is conducted. This internal evaluation takes a few minutes after which your full eye examination is usually complete. When you leave the clinic the eyedrops typically affect your vision temporarily for 3 to 6 hours (although maximum effect is usually experienced after 30 to 60 minutes after the eyedrops instillation). During this 3 to 6 hour period, significant light sensitivity is usually experienced. So we recommend you BRING SUNGLASSES if you have them. Typically your vision after is blurry at near but fairly clear at distance. For most patients, driving afterwards is no problem if you have sunglasses.

Gonioscopy is an eye examination to look at the front part of the eye called the anterior chamber. The anterior chamber is between the cornea and the iris. Gonioscopy is used to see whether the area where fluid drains out of your eye is open or closed. It is done of the doctor observes during the routine examination that the angle appears narrow. If the drainage angle of the eye is closed or nearly closed, you could be at risk of having narrow angle glaucoma. Early detection is crucial to prevent an angle closure attack. Preventative treatment is provided by having a laser peripheral iridotomy performed by an ophthalmologist.

An integral test for assessment of the health of your eye is photography. These pictures are necessary to document the health of the optic nerve, vitreous, macula, retina and its blood vessels. The photographs are used for comparison, documentation, and sometimes to diagnose certain eye conditions. 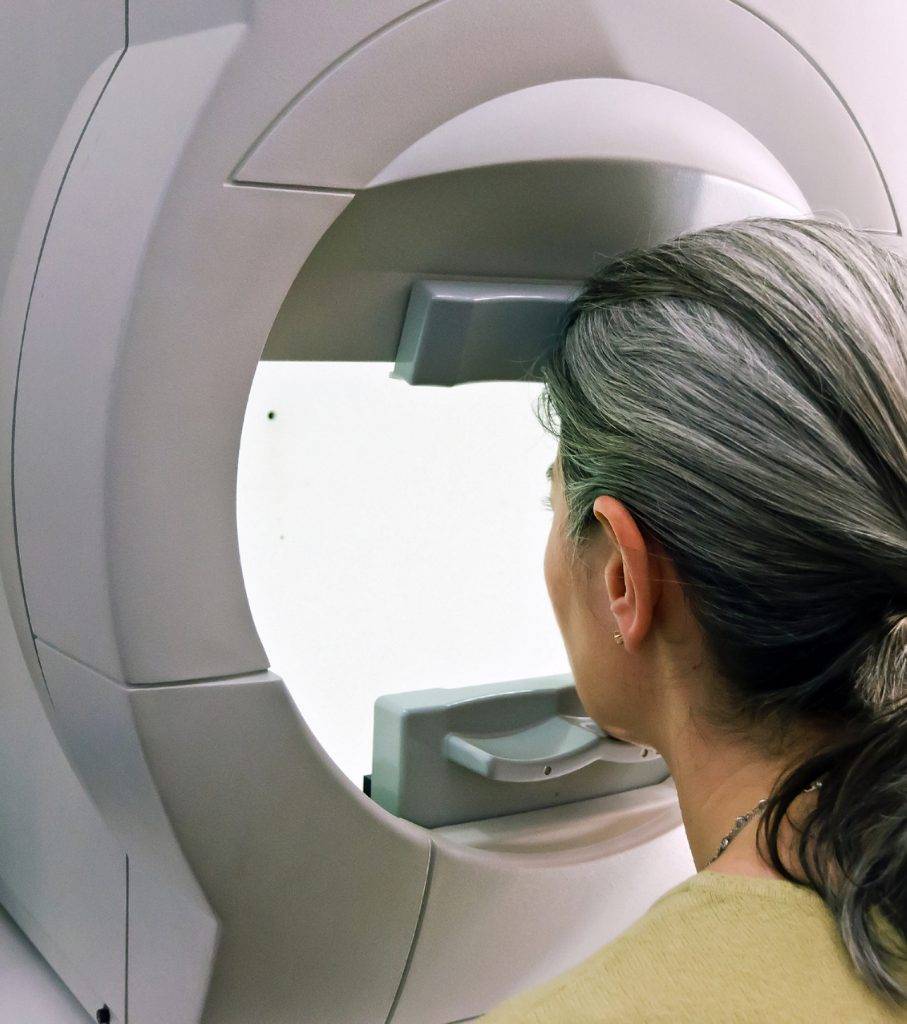 The visual field is used to test and monitor peripheral vision. It gives the doctor very important information about the neurological function of the retina, optic nerve, and brain. This test is usually ordered to monitor certain eye diseases such as glaucoma.

Visual field tests come in different forms, but most have a white bowl with a small fixation light in the center. You will be seated in front of the instrument, you stare straight ahead as lights flash in the periphery and press a button each time a light appears. Afterward, the computer analyzes the data and prints a chart of the results. Your visual field results are organized in your record so that your doctor can monitor your progress.

Tonometry is the measurement of the eye’s pressure, better known as IOP – intraocular pressure. Your eye doctor will instill a drop of anesthetic into your eye. The doctor will then place a small amount of fluroscein (yellow dye) into the eye. A small device called a tonometer is moved close to the eye so that it gently touches the cornea, measuring the pressure of the eye. If eye pressure is higher than normal, your risk of developing glaucoma increases.

The doctor uses an instrument called a slit lamp, also called a biomicroscope, to examine the front (anterior segment) and back (posterior segment) part of the eye to evaluate the overall health of the eye. The instrument magnifies your eyes many times and uses a bright light to illuminate the eye structures. Each part of the eye, including the eyelids and eyelashes, conjunctiva, cornea, iris, crystalline lens and anterior chamber, is examined in a methodical manner to reveal any defects or diseases. Cataracts, for example, can be diagnosed using the slit lamp.

Pupillary reactions (the way your pupils dilate and constrict in response to light) can reveal a lot about the health of the eyes and your body. The nerves that control the pupil travel through a long pathway within the body. Therefore, certain pupillary reactions can reveal neurological problems. Serious conditions can be found this way. Your pupil reactions are tested with a very bright light directed toward one or both of your eyes. Your doctor may focus on one eye or swing the light back and forth to study the way your pupils change.

The cover test is performed to measure how well the eyes work together. It is a simple test in which the doctor asks you to fixate on a near or distant object. The doctor covers one eye, pauses, and then uncovers it. He is evaluating your eye as it is uncovered, as it refixates on the target. This test helps to detect eyes that are turned in or out (strabismus).

Retinoscopy is a test that gives your eye doctor a way to measure refraction, or yoru need for glasses. It is usually performed early in an exam to estimate the patient’s prescription for glasses. In most cases, the doctor will have you look at a very distant object, such as the large “E” on the eye chart. A device called a retinoscope will then be shown into your eyes. A prescription will be determined based on the degree of light reflecting off of the retina, usually fairly accurately. In addition to giving your doctor a starting point, it is also particularly helpful in young children and adults that may not be able communicate effectively.

Children may need to receive drops called Cycloplegics. Children have such active and healthy focusing systems that it is often difficult to understand the true nature of their vision accurately. A cycloplegic eye examination enables the doctor to determine the true vision correction of the eye by knocking out the focus mechanism of the eye. Cycloplegics paralyze the accommodation, or focusing of the eye in these children. It assists the doctor in prescription determination. Some cycloplegic drops will keep the child dilated for 12-24 hours.

Some adults will need cycloplegic eyedrops. Adults who overfocus or underfocus may benefit from cycloplegic testing. Adults who are undergoing laser refractive surgery also must have a cycloplegic refraction to determine the correction necessary to programming the laser for accuracy.

The Cardiff Acuity Test is designed for measuring visual acuity in young children aged 1 to 3 years, and in older children and adults who have intellectual or verbal impairment. It allows us to measure acuity in people who cannot communicate well enough to name a letter or a picture or to describe what they see. The Test works by ‘Preferential Looking’ – the child simply looks towards the target, and the examiner watches this eye movement response to determine whether the child can see the target. If the child reliably looks toward the target, we assume that he/she can see it. If the child does not look at the target, we assume that he/she cannot see it.